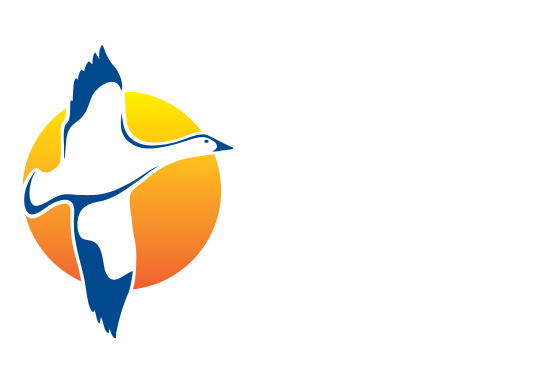 Foggy morning at the marsh

The numbers are in… well almost.
We did our first waterfowl count this morning, Friday, October 9, but the results do not reflect the numbers of ducks and geese we have at the marsh. The thick fog made it that we could hear a lot more birds than we actually saw.
We met in the parking lot of the Interpretive Centre at 6:30 a.m. under a beautiful starry dark sky. We had a glimpse at Orion and the Pleiades. A thin crescent moon was rising in the east surrounded by bright Venus, Jupiter and Mars and we even saw some northern lights activity in the north. After determining our counting location around the marsh, we set out to take position and wait for the sunrise. This is usually the time the birds are leaving the marsh in large numbers to go feed in the surrounding fields.
Unfortunately for us, this is also the time the fog started to roll in. As the day was breaking we could hear the agitation building up in the marsh. The honking and quacking was growing louder but we could also see some fog patches getting larger by the minute. At one point, it felt like we were in a cloud! Needless to say, it was impossible to count birds. We caught a few glimpse of winged creatures moving in the fog but no real numbers could be tallied.
By 9 a.m. we had less than a thousand birds recorded but as the fog was dissipating, we could finally see the birds we had been hearing for the past two hours. Some had not left the marsh yet and were just getting started to leave. We counted approximately 13,000 Canada Geese, 1,000 Snow Geese and 10,300 ducks. Even though we managed to count these late birds these numbers do not reflect the large numbers of ducks and geese that use the marsh at this time of the year. I’m hoping that next week’s count will give us a better idea.

We did a waterfowl count again on Wednesday, October 14, and this time the weather was perfect for counting! Not a cloud in sight and temperatures hovering between 5 and 10 degrees Celsius.  We also had quite a few volunteers to assist us with the survey. The marsh was divided into 6 sections and most sections had two people counting. The number of geese and ducks was quite high compared to our previous count. We counted over 57,700 dark geese (Canada Geese and Cackling Geese), 3,600 white geese (Snow Geese and Ross’s Geese) and over 57,600 ducks of various species.

It’s not certain if we have passed the peak or if it has yet to come but our next waterfowl count will give us a better idea. Glistening frost on the marsh

As we first arrived at the marsh this morning, there were a few thin veils of fog lingering here and there over the marsh. There was a good frost and some ice on the marsh making everything glisten in the weak light of the sunrise. Luckily, the fog dissipated fast in my corner of the marsh and we could start counting birds by sight rather than by sound. This was the first time I did a count on the East side of the marsh and I was absolutely amazed at the numbers of ducks we had. At some point, my counting partner and visiting guest, Catherine Jardine from Bird Studies Canada called them “ducknadoes”. It was truly an amazing sight! For the first part of the morning, the ducks dominated the sky. Then as the sun climbed higher in the sky and the rays grew stronger, the Canada Geese started to come up in big number. And fast! The sky became alive with waterfowl. Everywhere we looked there were birds to be seen. Blackbirds peppered the sky as if someone had decided to add spice to our morning sky. We even spotted a Short-eared Owl, some Bald Eagles and a few songbirds including Juncos, American Tree Sparrows and a few Snow Buntings.

It appears our corner of the marsh was the busiest this morning as reports from the other counters were not as fruitful. The folks counting in the North were almost as busy as we were in the east but those in the South and West didn’t have much action, thanks to a lingering fog blanket. Our numbers today were as follow: over 28,700 Canada Geese,  900 Snow Geese and over 16,600 ducks.

Those are pretty good numbers but they are significantly lower than last week which it is a good sign that the birds are slowly making their way south for the winter.

As this was our last waterfowl count of the year, I would like to thank all the volunteers who helped make this possible.